Curt Schilling appeared on the Hall of Fame ballot for the first time a year ago with overwhelmingly strong credentials for election: The 216-game winner ranks 26th all-time in wins above replacement for pitchers (17th-highest total since the live ball era began in 1920) and 15th all-time in strikeouts, including three 300-strikeout seasons; he’s got the best strikeout-to-walk ratio of any pitcher ever (well, not counting a guy named Tommy Bond who was 5-foot-7, born in Ireland and began his career with the 1874 Brooklyn Atlantics) and three 20-win seasons; and he led the league twice in wins, twice in innings, three times in starts, four times in complete games (his 15 complete games in 1998 is the highest total in the majors since 1991), twice in strikeouts and five times in strikeout-walk ratio. Schilling never won a Cy Young Award but finished second in the voting three times.
Of course, Schilling was also one of the greatest postseason pitchers ever, going 11- 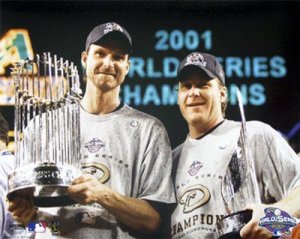 2 with a 2.23 ERA in 19 starts. His October legacy includes his iconic Bloody Sock Game in Game 6 of the 2004 American League Championship Series against the Yankees, a win in the World Series that year that helped end the long suffering of Red Sox fans, plus his dominant performance throughout the 2001 postseason when he allowed six runs in six starts as the Diamondbacks won the World Series. He helped the Red Sox win another title in 2007. His career 3.46 ERA in a hitters’ era gives him an adjusted ERA equal to Tom Seaver and Bob Gibson and higher than Hall of Famers like Jim Palmer, Juan Marichal and Bob Feller.
Schilling was great, he has the advanced metrics that scream Hall of Famer, and he was an iconic figure in the game while active. What more do you need to get elected to Cooperstown?
More than 60 percent of voters didn’t check Schilling’s name on their ballot.
Then there’s the pitcher who finished with the same career adjusted ERA as Schilling. His best ERAs, all in seasons where he pitched more than 210 innings, were 1.89, 2.38, 2.39, 2.58 and 2.69, all coming when offensive totals were exploding. The worst of those seasons had an adjusted ERA+ of 150. Since 1920, only five other starters had five or more seasons with at least 200 innings and an ERA+ of 150 or higher: Greg Maddux, Roger Clemens, Lefty Grove, Randy Johnson and Roy Halladay. This pitcher had another season where he went 18-9 with a 3.00 ERA and another where he went 21-11 with a 3.32 ERA while leading his league in innings pitched. He won more than 200 games. He had a 16-strikeout game in the postseason. His career pitching WAR of 68.5 is higher than Palmer, Carl Hubbell or Don Drysdale.

Kevin Brown got 12 votes in his one year on the ballot, not close to the 5 percent needed to remain on the ballot, and he was kicked to the curb alongside Raul Mondesi, Bobby Higginson and Lenny Harris. Thank you for your nice career, but your case has no merit. Heck, Willie McGee received twice as many votes. I mean, Willie McGee was a nice player, and even a great one the season he won the MVP Award, but he had about half the career value of Brown.
The Baseball Writers’ Association of America treats starting pitchers like they’re infected with the plague. They’ve elected one in the past 14 years: Bert Blyleven in 2011. And Blyleven, despite winning 287 games and ranking 11th all-time in WAR among pitchers, took 14 years to finally get in. Meanwhile, the BBWAA has elected three relief pitchers in those 14 years, so it’s not an anti-pitcher bias; it’s an anti-starting pitcher bias.
What’s happened here? How come no starting pitcher who began his career after 1970 is in the Hall of Fame? Leaving aside the case of Clemens, who would have been elected if not for his ties to PEDs, there are several issues going on.

1. The 1980s were barren of strong, obvious Hall of Fame pitchers. The BBWAA ignored the cases of borderline candidates like David Cone (pictured below), Dave Stieb, Bret Saberhagen (pictured above) and Orel Hershiser, and instead embraced Jack Morris, a lesser pitcher than those four but a guy with more career wins.

3. Speaking of wins … Hall of Fame voters love wins like Yasiel Puig loves driving fast. Morris has 254, a main reason he earned 67.7 percent of the vote last year despite his 3.90 career ERA. Schilling has 216 and Brown 211. The fixation on career wins — and 300 in particular — is the result of a unique generation of pitchers; it’s a standard previous pitchers weren’t held to. Bob Gibson won 251 games, Juan Marichal 243, Whitey Ford 236, Don Drysdale 209 and Sandy Koufax 165. Focus on the entire résumé, not just the win total. Schilling didn’t win 254 games, let alone 300, but he’s a far superior Hall of Fame candidate to Morris.
Let’s compare Tom Glavine to Mike Mussina, both appearing on the ballot for the first time. With 305 wins, Glavine appears to be the much stronger candidate than Mussina, who won 270 games.

Here’s what one voter, Dan Shaughnessy of The Boston Globe, wrote:

Glavine and Maddux were 300-game winners. Those are magic plateaus … unless you cheated.
The rest of the list of players I reject are good old-fashioned baseball arguments. (Craig) Biggio got 68.2 percent of the vote last year, but I don’t think of him as Hall-worthy (only one 200-hit season). Same for Mussina and his 270 wins (he always pitched for good teams) and (Lee) Smith and his 478 saves (saves are overrated and often artificial).

(Also, Shaughnessy is apparently voting for Morris because he won 254 games, which I believe is less than 270.)
Anyway, when you examine the numbers a little deeper, Glavine and Mussina compare favorably:
Pitching WAR

The point here isn’t to detract from Glavine, but that Mussina has every bit the case Glavine does — or 95 percent of it, giving Glavine some extra credit if you wish for his two Cy Youngs. Glavine hung on and won 35 more games; Mussina retired after winning 20. That doesn’t make Glavine a superior pitcher.
4. Stingy voters. To a certain extent, the BBWAA voters have become tough on all candidates — not just starting pitchers and PED users.

Remember, that downward trend is occurring despite an increasingly crowded ballot due to the split opinions on what do about the PED candidates. With as many as 15 to 20 legitimate Hall of Fame candidates on this year’s ballot it will be interesting to see if that 6.6 players per ballot increases further. 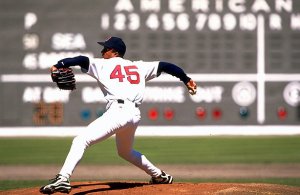 5. Timing. The starting pitching problem will be abated somewhat in upcoming elections. Maddux will get in this year, Glavine this year or next. Randy Johnson, Pedro Martinez (pictured above) and John Smoltz (pictured below) then join the ballot next year. Johnson is a lock, and Martinez has the Koufax-esque peak value thing going for him, although with 219 wins he’s not a first-year lock. Smoltz is similar to Schilling in many ways, down to the career win total (213) and postseason heroics, so odds are he’ll face the same uphill climb.

I believe most Hall of Fame voters have the same goal: Elect the best players to the Hall of Fame, or at least the best ones they believe to be clean from PEDs. That issue is still stuck in the mud, the Hall itself refusing to give guidance to the voters. But electing Curt Schilling and Mike Mussina is simply an issue of understanding their greatness. They are among the very best pitchers in the history of the game. They deserve to be elected this year, alongside Maddux and Glavine.